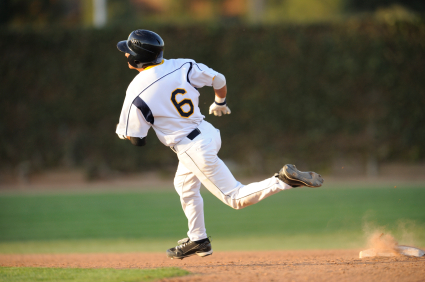 Situation: Runner on third, 2 outs, the offense is down 4-3 in the bottom of the 8th. The 4-hitter is up. He is the biggest run producer and power hitter on the team.

Play: The hitter works the count to 2-1 and gets the pitch that he is looking for, but he is too amped. His swing is rushed, tight, and he pulls off just a little bit. Even though he makes good contact, he knows immediately that he rolled over and it’s going to be a grounder right at the shortstop. He slams the bat to the ground and takes a couple frustrated, slow steps towards first. As he glances in, he sees the ball take a bad hop and hit the shortstop right in the chest. The hitter starts running as hard as he can towards first. The shortstop grabs the ball from where it fell, just next to him, and fires a throw to first.

Outcome: The throw beats the hitter by just a half a step, and the umpire calls him out. The run does not score.

What Went Wrong: The big situation will always bring out tension in a hitter. The best hitters, and the best RBI-men, can control their emotions so that their swings stay consistent. But it’s hard, and sometimes emotions get the best of all of us. What cannot happen is letting emotions control the situation after the ball has been hit. A hitter cannot control if he hits the ball at someone, but he can absolutely control his hustle afterward. The frustration that the hitter showed in this situation caused him to be out. For the hitter, the difference between safe and out in this play was the first few slow steps, the uncontrolled show of emotion. If he had controlled his emotions and sprinted out of the box, he would have been safe and the game would have been tied. But because he let his frustration get the better of him, he cost his team a run. Don’t let it happen to you. Control what you can control and always go as hard as you can until the play has ended.