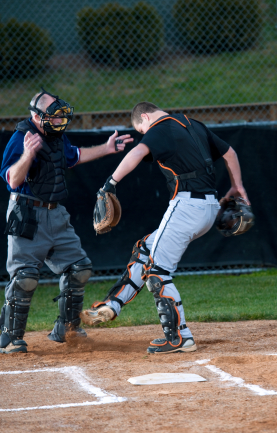 Below, we update a previously posted article to keep up with changing attitudes to the changes we see in the game.

“The ballplayer who loses his head, who can’t keep his cool, is worse than no ballplayer at all.” –Lou Gehrig

There’s no debating that the way baseball is being played is changing. The game is slowly starting to embrace a more modern flair. Bat flips and celebrations that would have cost a beaning in past generations are becoming the norm. Still, many college coaches debate the outward displays of emotion that they see. Sure, it’s a new generation, but how much bat flip is too much bat flip? How much emotion can a player display before it becomes a side show? Since we know college coaches are spending a lot of time  evaluating the body language  and behavior of recruits, we take a look at some of the emotionally-charged situations college coaches see on the recruiting trail and how they help or hurt a recruit’s chances of being recruited.

Situation 1:  A player experiences failure, gets upset, returns to the dugout and throws his equipment, pouts, or withdraws from the game.

College Coach’s Take:  This is an easy one. It’s the ultimate recruiting no-no. Coaches will think the player can’t control his emotions, is immature, and can’t handle adversity that is inherent in the game. This will hurt his chances of getting recruited. The more marginal the skill set, the less likely coaches will tolerate immature behavior or the inability to control emotions.

Situation 2:  A player hits an important home run, flips his bat and pumps his fist.

College Coach’s Take:  College coaches will differ in their opinions here, but there is a big difference between an instinctive and quick reaction, and a planned spectacle. As soon as a player purposefully starts diverting attention away from his positive actions on the field, it’s a slippery slope and college coaches are less likely to be enthused by it. A player who hits a home run, flips his bat while he hustles down the line and pumps his fist when he sees it go over the fence is someone playing with passion and a desire to win. All coaches want passionate players who want to win. And home runs don’t hurt either! A player who hits a home run and pauses to flip their bat and make a huge spectacle, however, will be seen by some coaches as a player whose actions are taking away from his on-field talents and could become a distraction. At this point, most coaches default to “act like you’ve done it before” philosophy.

Situation 3:  In a bases-loaded jam, a pitcher strikes out 2 batters to end the inning. After the second strikeout, he slaps his glove, pumps his fist as he sprints off the field.

College Coach’s Take:  This is similar to the home run situation above. The vast majority of college coaches will love this, because the reaction matches the situation and performance, and comes after the job has been done. The pitcher is fired up about something that is over and done with, and he directs his excitement towards himself and his team. He doesn’t show up the opposing hitter or look at the opposing bench. He shows energy and passion, plain and simple.

Situation 4:  Players are involved in a tense, rivalry game. There is a play at the plate where a collision results in a controversial call. The teams start chirping at each other and tempers flare. Later in the game, the best player on the team whose catcher was run into takes out the shortstop with a hard slide on a double play ball that was hit too slow to result in 2 outs. He is called for interference. Before jogging off the field, he talks trash to the shortstop.

College Coach’s Take:  This is another example of emotions interfering with the ultimate goal—winning the game. The player thinks he looks tough trying to back up his teammates, but college coaches see his emotions interfering with the ultimate goal. His team needs base runners and runs, not outs. His attempt at revenge benefits his opponent and hurts his team and chances to get recruited, as he’s labeled a “hot head” or someone who can’t control his emotions.

Situation 5:  A pitcher doesn’t get borderline strike call on a 1-2. He stares at the umpire and is visibly upset by the call.  Still thinking about how he should have been out of the inning already, he loses his command of the zone. He walks the batter on two straight pitches nowhere close to the zone.

College Coach’s Take:  Bad calls are part of the game. They are also out of the player’s control. College coaches want players who control what they can control and control their reactions to what they can’t. The pitcher still had 2 opportunities to get the hitter out, but lost his concentration because of something out of his control. Recruiters would wonder about the recruit’s mental toughness and ability to overcome adversity. Is the pitcher so fragile that he needs everything to go his way to have success?

In all five of these situations, the deciding factor is whether the player exhibits emotional control. What matters most is whether or not a player lets his emotions take too much control over his actions. Baseball can be a game of highs and lows, and not letting these emotional swings dictate behavior is a skill that you will be working on as long as you play. It’s okay to get upset or excited, this will happen when you are invested, but these feelings can’t be the reason for actions that you take. If you ever wonder what emotions you should show, let New York Yankees Hall of Famer, Lou Gehrig’s quote guide you. “The ballplayer who loses his head, who can’t keep his cool, is worse than no ballplayer at all.” Keep your emotional cool, and get recruited.