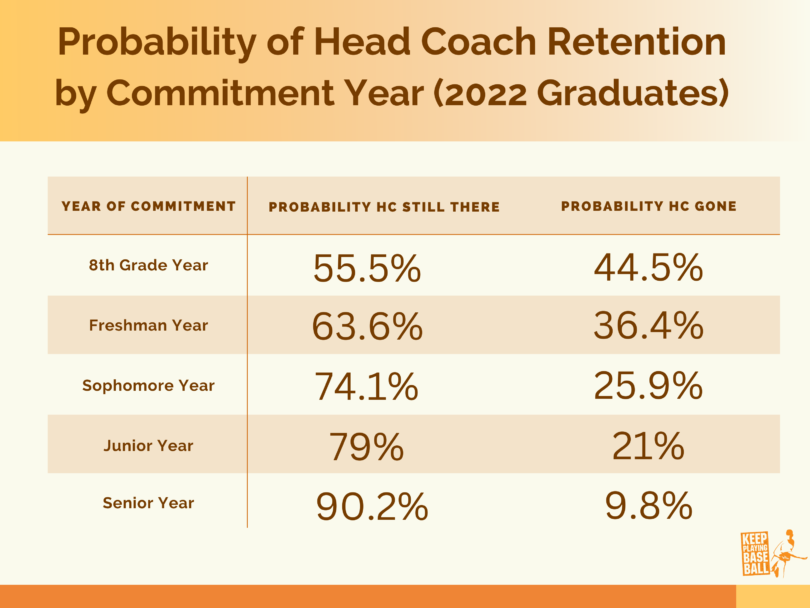 If you’ve read other KPB articles on the topic, you already know that verbal commitments are non-binding “handshake” deals between college coaches and recruits. In spite of providing no actual guarantees to the player, recruits race to make their “commitment.” Are there any real advantages to making an early verbal commitment? In this article, we take a closer look at college baseball head coach turnover since 2017 to help highlight why earlier isn’t always better when it comes to college commitments.

For current players and recruits, the return of a head coach is an important indicator of stability and predictability within a program. Current players know what to expect. Recruits can look into track record and do research to get a good feel for a program. As we discuss in our article, Dealing with a Coaching Change, head coach departures mark a major disruption to this norm and often come with widespread changes. These changes impact current players and recruits in significant ways.

For recruits, a coaching change at the top usually means the end of a verbal commitment and the reopening of recruitment. Thanks to the work of our friends at College Baseball Insights (“CBI”), we can get a great sense of how often coaching turnover impacts recruits. CBI has charted coaching changes since 2017 with remarkable accuracy. While the data set may not be perfect, it is close enough to demonstrate important trends and paint a clear picture.

With the exception of 2020’s Covid-cancelled season which resulted in less head coach turnover, we know that since 2017 there is roughly 9-15% head coaching turnover each year for all of college baseball. The average length of tenure for head coaches who were replaced between 2017 and 2022 is just under 8 years. The average length for coaches who were retained during that same period is just over 8 years. The chart below shows total head coaching changes and head coach turnover rate across all college baseball programs since 2017. 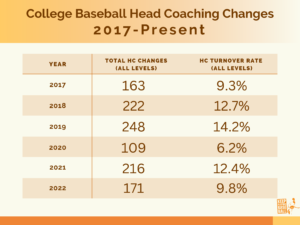 While we know that job security is not the same for all college coaches and decommitments are more nuanced than tracking head coach changes, the numbers above help to illustrate one very real risk of committing earlier. How much higher is the likelihood that the coach won’t be there if you commit freshman year versus senior year? Let’s use the real numbers to dig in!

Let’s assume we are talking about a 2022 high school grad who would have just landed on campus this fall. The table below shows the likelihood that a head coaching change would have occurred during his commitment based on the year they commit. 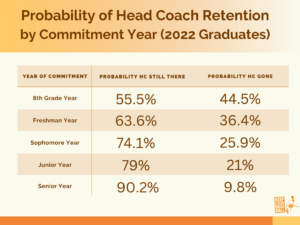 General trends like those shown above are important, but recruits who are considering specific programs and conferences should get even more granular with their research. For example, 7 of 14 (50%) of head coaching positions in the SEC have turned over since 2017. The Pac-12 has had a whopping 12 head coaching changes during that same period! Since those conferences are leaders in early commitments, what does that mean when you commit as a freshman? The programs that don’t perform in those conferences over the next few years are likely to have new coaches at the helm by the time a freshman or sophomore is ready to be on campus.

Of course, head coach turnover is just one of many reasons why college commitments fall through. Assistant coach turnover, lack of developmental progress, over-recruiting, or a pandemic impacting open roster spots are others, to name just a few of many. So while player commitments are happening earlier and earlier, what value does that hold? Do recruits actually benefit? Based on what we see from college coach turnover data alone, it would seem that they don’t. The earlier the commitment, the less likely it holds up. How strong of a “commitment” is being made if the odds that it works out are little more than a coin flip? How does that benefit the player and family? In our view, it doesn’t.

So what does all this mean, exactly? In our view, there are several major takeaways and things recruits can do to position themselves for recruiting and college baseball success:

College Baseball Insights has shown that you can understand a lot about a program you are considering by looking at the data and trends. Who do they recruit? What does year-to-year player turnover look like? How many guys do they have returning at your position? What are the characteristics and skill sets of these players? Has the program been winning? How long has the coach been there? Is the coach on the hot seat? This type of research will save you time, allow you to pursue the right programs, help you better understand what opportunities look like in a program, and give you a solid idea of what you can expect at a certain school. If you can’t afford a service like CBI, here’s how you can do that research yourself and why it’s important.

It takes what it takes to play at a certain school. You need to be better than the other recruits to make the team and better than the other players on the team to earn playing time. If a school is interested in you as a high school freshman or sophomore because of your potential, they should still be interested in you as a junior when you’ve fulfilled that developmental promise. If you are committed as a freshman or sophomore and don’t fulfill that potential, you are likely to lose that slot to a player with a better skill set anyways, whether you are committed or not. It’s incredibly competitive and it takes what it takes to play. You need to embrace the competition and instead of falling for the false sense of security provided by an early verbal commitment, double down on your development and ability to play at or above the standard. If you are good enough, they will create space for you.

Take Your Time and Make an Informed Decision

Committing is not a race. Just because everyone else is hurrying towards a commitment, it doesn’t mean that’s the best thing for you to do or that it will result in the best outcome. NCAA research has demonstrated that players who commit later have more positive feelings about the recruiting process. Finding a lasting fit is more important than committing for the sake of committing. We’re not saying wait forever, were just saying you shouldn’t commit until it makes sense for you, you’ve had time to do your homework on the school, and you are ready.

The baseball program should be a big part of your college decision, but it shouldn’t be the only thing. Pick a school where you can see yourself if baseball doesn’t pan out. You have no control over coaching changes, injuries, and so many other things that can impact your baseball experience. Choosing a school with an area of study you enjoy, in a place you want to be, where you can see yourself happy is most important. Don’t neglect the non-baseball side of your decision because it can save your college experience if baseball doesn’t turn out the way you hope.

Note: The data used for this article has been pulled from 3rd party sites. While we are confident it provides an accurate picture of the college coaches carousel, the information may be incomplete or change. 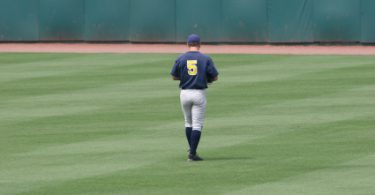 Left fielders  have a range of talents at the collegiate level. Coaches will put guys with widely...