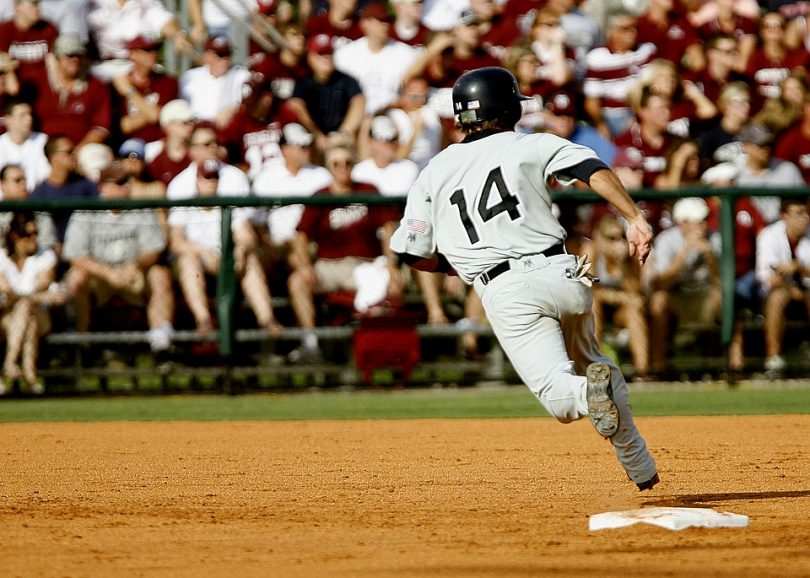 The Situation: There’s a 1-2 count with two outs and runners on 1st and 3rd. It’s the top of the 7th inning of a game the visiting team leads 4-2.

The Play: The visiting coach decides to put on an early break 1st and 3rd play that the team has practiced religiously. The play is designed for situations like this, where the odds have shifted against the hitter and the team is willing to give up an out to try to get the run to score first. The sign is put on and the wheels are set in motion.

As the pitcher receives his sign and begins to come set, the runner on 1st sprints off first towards second. He takes three hard steps and then falls on the ground like he has tripped. The defense has been trained for this type of play. The pitcher steps off the rubber, freezes the runner at 3rd and spins to give the ball up to the middle infielder. The runner at 3rd times the throw to the crashing second baseman well and despite starting from a stopped position, gets a good jump towards home. The second baseman has crashed towards the baseline hoping for a quick tag, but the throw is towards second base slightly and forces him to shift his momentum. By the time he has gathered the ball and re-directed his momentum towards home, he knows it’s going to be too late. Frustrated, he turns his attention to the rundown between first and second base.

He sprints at the runner, closing the gap and coming close to a tag, but worries he may not be able to get there and is forced to give the ball up to the 1st baseman.  The base runner quickly pivots back towards second and is about to collide with the second baseman who’s trying to peel off after his last second short throw.  Instead of colliding with the second baseman, the runner quick steps towards the outfield making himself skinny and goes around him. He runs out of gas and is chased down by the 1st baseman.

The Outcome: The run has scored and the inning is over. The play has accomplished its goal and the visitors now hold a 5-2 lead heading into the bottom of the 7th.

What Went Wrong? The throw to the second baseman was slightly off the mark and cost the defense a chance to get the runner at home, but the pitcher did everything right except make a good throw. We’ll save that discussion for another time.

The second baseman also made a mistake by putting himself in a position for the runner to make contact and be awarded second base for obstruction. This is also a mistake worth noting, but the biggest mistake of all is on the runner for not taking advantage of the second baseman’s mistake. While the runner did his job by staying in the rundown enough to get the run home, he missed out on the chance to keep the inning alive for a shot to add a 4th insurance run. Instead, the runner avoids the collision, stepping around him. Although we don’t know what would have happened, missed opportunities like these can come back to haunt a team if a comeback takes place.

Anytime you are caught in a rundown, by design or on accident, the odds are stacked against you. The best get out of jail free card is creating an obstruction situation where you draw contact with a careless fielder in the base path. When you are running, you need to seek contact and capitalize whenever the opportunity presents itself. Had the base runner run into the second baseman, the play would have been executed to perfection. Instead, he’ll have to learn from it and look for the opportunity next time!