The bases are loaded with two outs in the bottom of the 15th  inning. It’s a tie game and has been knotted at 6 apiece since the top of the 9th  inning. There’s a 1-2 count on the right-handed hitter. The right handed closer gets the sign for a fastball off the plate away and comes set.

The pitcher delivers the pitch and it’s headed to the catcher’s glove, set up 6 inches off of the plate. Much to the chagrin of the well-executed pitch, the batter is sitting away and takes a good swing, driving the ball to the right side. The well-hit grounder takes the first bounce on the dirt and the second bounce scoots just wide of the outstretched glove of the diving second baseman. Once the ball gets past the second baseman, the batter throws his hands up in celebration and he starts to widen his turn to first, anticipating a mauling from the dugout, who are already hopping the netting and heading towards the field.

As the runner starts his turn, the right fielder comes charging in hard on the ball, not willing to concede defeat quite yet. He fields the ball and heaves it to first base as quickly and hard as possible.

The batter is momentarily jolted out of celebration mode as he awkwardly swerves back towards first base and through the bag like an infield single, instead of rounding it. He beats the ball to first base, but only by several steps for the walk-off hit.

This is a classic case of a pitcher getting beat on a well-executed pitch. He does what he is supposed to do. The second baseman sells out to make the play, as does the right fielder. Is there a glaring mistake on the play? No. If anything, the mistake is on the part of the batter for celebrating a bit too early. With today’s celebrations, you could see how someone showboating or excessively celebrating before getting to first base could possibly get thrown out. In years of watching baseball, we have never seen it, but some day we will. The reason why we are even aware of that possibility is because of the unbelievably heads-up play by the right fielder.

It would be easy for the right fielder to pack it in and jog off the field. Instead, he refuses to concede defeat until the play is over. He charges hard and delivers the ball to the most likely place to keep the game going—first base. On most walk-off singles, we see the desperation heave go to home, where it is way late. Throwing to the closest base (first, in this situation) is an incredibly smart play, because the batter is the most likely to get out if he celebrates too early and doesn’t get to the bag in normal time. The lesson here is to never give up and never concede until the game is over. Although it didn’t work out in the Super Regional game between Davidson and Texas A&M in 2017, it was a great last-ditched effort we all can learn from. Whether on offense or defense, think the game and play hard until it’s officially over. 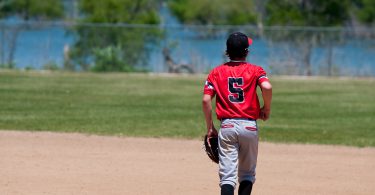