Note: This article was first published several years ago, but it’s lessons are as true today as ever.

Gaither Bumgardner knew he wanted to play college baseball as a nine year-old. He can recall walking away from the field after a Little League game and having the “light bulb moment”. Living in the small town of Great Falls, South Carolina, Bumgardner also knew it would take a concerted effort to get his name and face in front of college coaches and create his own exposure. He started putting his recruiting plan to action and contacting coaches the Summer before sophomore year. By the start of his sophomore year, Bumgardner was targeting individual programs and starting to drum up returned interest from college coaches. He went on his first baseball visit and received his first offer during the Summer after his junior year. Right before Senior year started, Bumgardner verbally committed to USC Upstate, a school he didn’t know anything about when the recruiting process started. From there it was smooth sailing and he signed during the Early Signing Period. At Upstate, Bumgardner went on to be the A-Sun Conference Player of the Year and was drafted by Mets after his senior year. He sat down with KPB to share his insight on making big recruiting noise out of small town USA.

What advice do you have for recruits who live in small towns or remote areas that might need to put more of a concerted effort towards exposure?

You have to get out of the town during the summers. I don’t recommend being one dimensional as an athlete and just focusing all year on baseball, but I do recommend going to showcases and other places and maybe even other states […] Networking is actually a big part of it, too. If you know somebody who is playing, see who they know. Make sure that they know you have interest and want to play […]It could be at University of South Carolina or it could be in the middle of nowhere, half way across the country, at a small school, but if you really want to play there is a place. Just make it know that you want to play. Email is also good, use your contacts that have played, and just get out there and try to get your name and your face into the hands and books of as many coaches and recruiters as you can.

You ended up with multiple offers. How did you go about evaluating your options?

It told me what kinds of schools were going to be interested and that held true. Those are the types of schools that I began targeting then. I kind of knew that if those are the offers that are coming in, well then lets look at some of the ones that haven’t offered and see if they would be interested. So we evaluated the school based on their academics first, because that was important, and then after that the fit for me, and how the baseball program was going to allow me to grow. That was my biggest thing, too. I didn’t want to go somewhere where I was going to sit for a while, I wanted to compete for a job right away.

How did you handle interactions with the various coaches and recruiters?

Dealing with different coaches was a big thing too, the different ways in which they recruited. Upstate was very patient with me. They allowed me to weigh my options and there is another school that I won’t name, that was very pressuring. They made a good offer, and once they did they would call and ask for a decision every time they called. And that was more of a turn-off rather than something that made me want to go there. I knew I wanted to weigh some options and that became a part of my plan, too. [I thought], how are these people treating me now? Because that seems to be a reflection of how it’s going to be when I actually get on campus.

So it sounds like there was some heavy pressuring going on?

Yes. I made a couple of visits where they were almost asking for a decision that day. And I would never do anything that way, just in my opinion, but I don’t think anybody should. You shouldn’t find out about a place, have an offer on the table, and then immediately make a decision without weighing the pros and cons of anything. So that was surprising, really, the amount of pressure that the schools and recruiters themselves can put on a player. And its not just the player, it’s the whole family. A lot happens quickly once the offers and visits start rolling in. And I think its important to take a step back and look at what is important to you and your family before you make your decision just solely based on an offer that’s on the table.

It sounds like your parents helped support you as you sorted all of this out?

Yeah, they were amazing. They were always supportive of everything I wanted to do, and they still are, but baseball in particular, they knew that was my love and that I wanted to do that in college. So, they went with me on the visits and they would listen to what the coaches would say as well. There were times where obviously the coaches would meet with me individually, but then I would always bounce ideas and what was said off of them. My mom was actually a big influence in guiding me away from a couple of places, just simply because of how she felt about what was said and the feeling we got from being on campus. And she was very honest about what she felt and that helped me because when you are being told that you are great by these recruiters and their bringing you in and showing you all this wonderful stuff, and putting on a show, it’s sometimes hard to see what’s actually going on. So, having two people who care about me and care about my future rather than the future of just the baseball program that was recruiting me was very important. Somebody looking at it from an outside in view, rather than just seeing all the positives. […] You need to have somebody that can tone it back and be brutally honest at some points.

Later, playing summer baseball, I played with some people that were in other programs that had recruited me also, and a lot of what we had feared had gone on at those places. Nothing terrible, but enough to where I was very satisfied and happy with the decision that I had made. And a lot of that was because of where I had been guided by the people that were important and who cared about me. So, it ended up being true for me that having someone else there to kind of look at things from the outside perspective was very important.

Last question. If you had one piece of advice to give to a high school recruit, what would it be?

Honesty. Be honest with yourself. Be honest with the recruiters. And never stop the work[…]Just because you are now considered a college baseball player or a college baseball recruit, that’s just the first step […} Just when you start getting recruited that should be an indicator to kick up the work load and actually go harder, because it’s a whole ‘nother level. The game speeds up and you are expected to be able to walk right in and be okay with that. So like I said, be honest with where you are as a player, be honest with your recruiters, and then work even harder than you were before you got the offers. 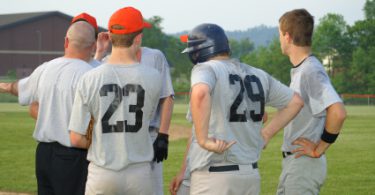 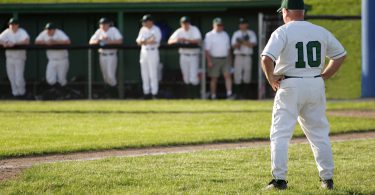