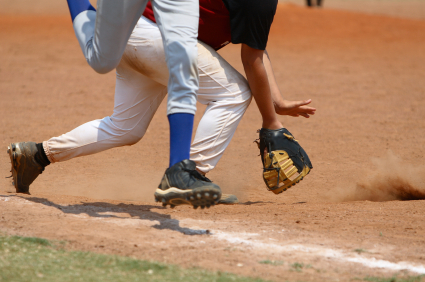 Situation: Man on 3rd, 2 outs, top of the 7th. The defense is ahead 3-2. The pitcher is probably facing his last hitter of the day.

Play: The pitcher wants to get out of this jam so that he can leave his team with the lead. He’s battling, throwing good pitches to a tough hitter. Finally, the hitter hits a slow roller toward the hole between first and second. The pitcher knows that his infielders are going to make the play so he turns to watch. But the first baseman has ranged over to catch the ball. The pitcher breaks too late to cover first and the hitter is safe. The runner from 3rd scores to tie to the game.

Outcome: The pitcher is pulled. His bullpen now has to clean up the rest of the inning and the pressure is back on his offense to score.

What Went Wrong: The pitcher was having a great outing and he was doing his best to battle to get the last out. You can’t ask any more of your pitcher than that. But he let the situation get the better of him. As soon as a ball is hit to the right side of the field, it should be engrained in any pitcher’s head that his very first move should be to cover first. It doesn’t matter if it turns out to be a routine grounder to the second baseman. Any ground ball to that side deserves at least a hard first step towards the bag. Getting into this routine until that step is an instant reflex can be the difference between getting an out and giving up an infield hit. In the college game, all hitters will hustle down the line. Be prepared to beat them. Understand that there is always a possibility you will have to cover first and be ready to go.