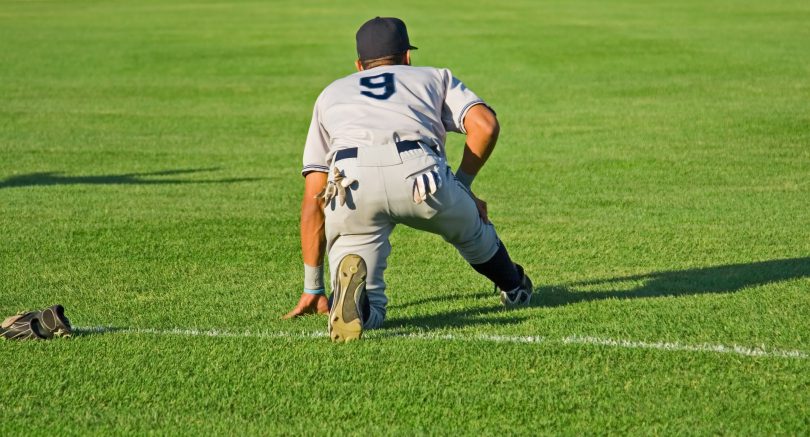 The Situation: There’s a 1-2 count with one out in the bottom of the 5th inning. No one is on base and the defense is winning the game 4-1. There is little wind and some cloud cover.

The Play: The pitcher delivers the 1-2 pitch, a fastball up by design. The pitch misses its intended location and gets more of the strike zone than the pitcher wanted. Despite missing a bit low, the pitch is good enough to get the batter to sky a pop-up into foul territory. The ball is the first baseman’s to catch and he knows it. As he takes a few hard steps towards the fence, he calls the ball. Before he knows it, the ball is on its way down and he is back pedaling frantically towards where he started. He reaches his mitt back overhead, arching his back, but the move is too little too late. The ball hits the ground with a thud in foul territory, and the first baseman follows suit, landing on the seat of his pants.

The Outcome: The hitter takes a ball to even the count at 2-2. He then fouls several tough pitches off and takes another ball to get to a full-count. On the 9th pitch of the at bat, the pitcher finally wins the battle with a groundout to the shortstop. After a two-out single, the defense gets out of the inning unscathed, still holding to the 4-1 lead.

We have addressed dropped pop-ups when they are near the fence or tarp, but this is a different (and very common) scenario. If you asked the first baseman, he would tell you that it’s a play he should make every time. Despite being considered a ‘routine pop-up,’ we see many dropped balls in foul territory by every infield position on an all too regular basis, even in college. While in this scenario it doesn’t seem that the error cost anything, there is no way to measure the impact that the 5 extra pitches will have on the pitcher’s performance as the game progresses. There is no denying that long at bats like that can wear a pitcher out quickly, even when they get the hitter out. It’s also no secret that rising pitch counts can lead to a pitcher losing his stuff earlier than usual. Who knows, it may even force the coach to take the pitcher out one or two batters earlier, due to the pitch count. Luckily, the dropped pop-up in foul territory can be a pretty simple fix if you understand the flight the ball takes on a pop-up.

Unless the wind is playing a big role in the flight of the ball, high backspin pop-ups will always come back towards the field of play. Depending on the way the ball is struck by the bat, it may come back a lot, or maybe just slightly. If you watch carefully in pop-up practice, at your games, or on TV, you will see what we mean.

The majority of the time that pop-ups are dropped in foul territory, it is from the fielder over-pursuing the ball and not being able to correct his mistake soon enough. So next time you get a chance at a pop-up in foul territory, don’t go running with reckless abandon. Stay under control, keep the ball in front of you, and remember that the ball will always come back towards the field of play. If you can remember this simple thing about the flight of the ball, you are well on your way to catching everything in your range. Now all you have to do is practice and observe!