You may remember us profiling Eric Thames’ torrid April to start the 2017 MLB season last year. To refresh your memory, he played 24 games and carried a .345 AVG, 28 R, 11HR, 19RBI, 1.276 OPS. In the article, which you can read here, we noted that Thames’ plate discipline and pitch selection were a major factor in his turnaround and improvement from years past.

Like Thames last year, Andrelton Simmons is off to a scorching start. Through 33 games, he is hitting a scorching .350 with a .407 On-Base percentage and a .902 OPS. Not bad for a player long recognized for his defensive prowess. To put Simmons’ offensive production in perspective, his wRC+ of 156, means he is performing 56% better than league average offensively. So what might account for Simmons getting off to the best start of his career? You guessed it, improved plate discipline.

Like Thames last April, Simmons has cut his chase rate (swinging at pitches outside the zone) down by 7% from last season. His chase rate of 21% is good for 15th best in the MLB at the time of writing this, and a solid 8% better than the league average chase rate of 29%. In short, Simmons is doing a better job of forcing pitchers to throw in the strike zone to get him out, and he is making them pay for doing it. Simmons, like Thames last year, is showing hitters at every level of baseball from Little League on up how they can get better, regardless of their physical size or tools. Plate discipline is a key sign of improvement, and if you want to improve as an offensive player, it’s a great place for you to start, today!

You don’t need to have Andrelton Simmons’ physical tools to improve your offensive value, but you would be smart to copy his blueprint for success. Focus on plate discipline and watch your offensive production improve. 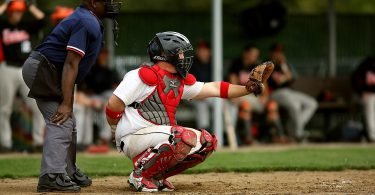