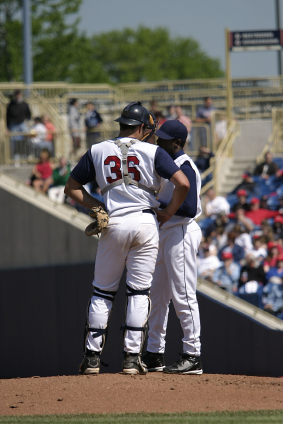 The Play: The pitcher knows that he can get himself out of a jam right here. He doesn’t want to mess around at all with the 9-hitter because he knows that the top of the order is on deck. The catcher calls for a changeup outside. The catcher taps the ground with his mitt and sets the target just off the plate. The pitcher knows that if he throws the pitch right in the corner of the strike zone, there’s no way the hitter can hit it. The pitcher throws, and even though the pitch is on the outside, he misses just a little up. The hitter reaches out and pokes it down the line. A run scores and the inning continues.

What went wrong: The pitcher got greedy in a situation that he should have controlled. Even though the pitcher is in a jam, he has to recognize that with an 0-2 count, he cannot keep trying to go right after the hitter. Sometimes, bottom of the order hitters are the most dangerous when you put them in protect mode because they’re forced to shorten up and just put the ball in play. In this situation, the pitcher has to remember that he can afford to waste a pitch. In this situation, the 0-2 pitch needs to be down and away, out of the strike zone. It has to be a pitch that the batter will chase, not a pitch that he has a real shot of hitting. Using an extra pitch to set up the hitter will help you get a safer out. Don’t let the situation take control. Think the game and execute your plan.