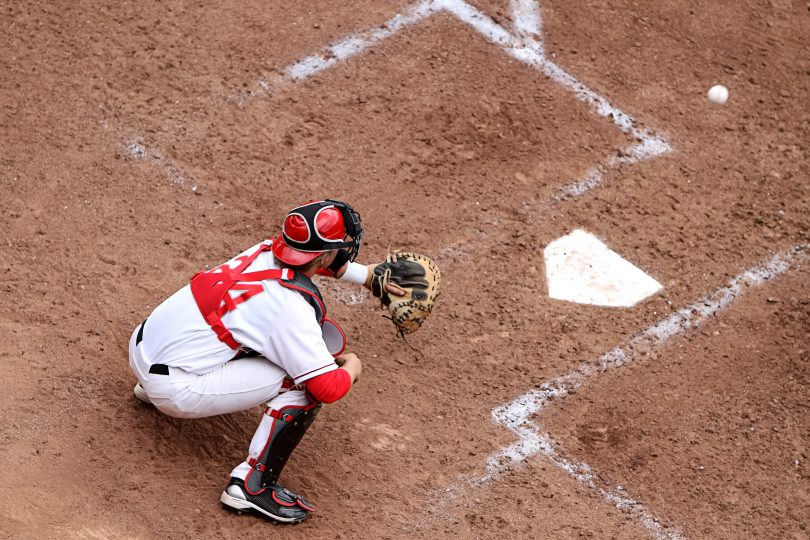 The home team has their ace going who has been nearly unhittable. He has a fastball/curve ball combination that has proven difficult for any team to score off of throughout the season and he’s destined to be a high draft pick. In the early innings, the visiting team can’t seem to get anything going. They are chasing the curve ball in the dirt and getting frozen on fastballs in the zone. The fastball and curve look identical out of the hand, before one drops off the table and the other almost seems to rise. He has racked up 7 strikeouts through the first 3 innings in an absolutely dominant performance. In the 4th inning, with the score still knotted at zeros, everything changes. All of a sudden, the visitors are no longer chasing the curve ball out of the zone and are right on every fastball. They start the inning off with 2 singles, to put runners on the corners with no outs for the 3-hitter.

The catcher puts down the sign for an 0-0 curve ball. The pitcher comes set and the catcher hops to set up on the outside part of the plate. The pitcher delivers a sharp curve ball that ends up being taken for a called strike in the bottom of the zone. On the 0-1 fastball, the catcher takes a half step in his crouch to the right and sets up for an outside fastball. The pitch is close but a ball. They come back with another fastball this time, and the catcher takes a half step in his crouch to the left. The inside fastball comes in and the batter turns on it, lacing a line drive just foul down the left field line. With a 1-2 count, the catcher calls for a curve ball. He hops into position and the pitcher delivers a wipe out breaking ball. It comes in at knee height, before breaking into the dirt. The catcher, expecting the pitch to be beneath the strike zone, blocks the ball and keeps the runners where they are. Much to everyone’s surprise, the batter doesn’t even flinch at the nasty pitch and takes it with ease. On the 2-2 pitch, the catcher calls for the curve again. He hops into position and the pitcher delivers. As the pitcher starts into his delivery, the hitter hears his number called from the dugout. This time, the curve starts at the top of the zone and breaks down. The hitter tees off on it, and the ball sails through the air.

The left fielder turns to give chase, but only as a courtesy. The ball lands well beyond the fence for a three-run dinger. It’s the first home run off the pitcher all year, and the first time he’s given up a homer on a breaking ball in his college career. His team is down 3-0.

Can you figure out how the offense suddenly solved the pitcher’s nasty stuff?  You may remember our Think The Game post where the pitcher was tipping pitches. Well, pitchers aren’t the only ones who can tip pitches. If you read carefully, you may have noticed the catcher fell into two distinct patterns when setting up the target. If you did, that’s a great eye for detail. He hopped into position on breaking balls and side stepped into position for fastballs. It took 3 innings of getting carved up, but the visiting team’s bench caught onto the pattern.

Since the catcher was setting up a little early, it gave the bench just enough time to use a quick verbal (the batter’s number) to identify the off-speed pitch. That’s what allowed the hitter to take the difficult 1-2 pitch with ease, and know that when the curve ball started high in the zone, he should let it fly. So in this case, the mistake is that the catcher is tipping pitches. The savvy bench of the visiting team again should be credited with a tremendous victory. They solved the pitcher (by way of the catcher), when no one else could. The offense still had to execute, but there’s no denying that knowing what was coming played a major role.

While it may seem like the way a catcher sets up is not a big deal, this is proof that the details matter. Consistency in set up and the ability to set up in different ways will help put catchers in the best position to receive the pitch and stay quiet behind the plate. Thinking the game and being cognizant of the way you set up will help you avoid tipping pitches from behind the dish. Regardless of who is tipping the pitchers, it is a team mistake. In the college game where looking to crack signs and recognize patterns is prevalent, everyone must do their part in watching opponents and teammates alike. In this case, no one on the home side noticed the pattern. The visiting team that picked up on the pattern first was rewarded handsomely. Thinking the game always pays off, so make sure you are staying locked in and looking for ways to help, even from the bench.