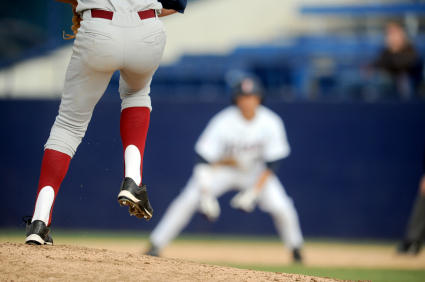 In this situation, the first baseman has to be prepared to move the second he sees the runner break for second. On a lefty’s slow pick, a first baseman’s job is to clear a throwing lane between first and second. You do this by positioning yourself so it isn’t possible for the runner to be in your way when you make the throw. This is more important for a right-handed first baseman than a lefty because lefties are more likely to have a clear throw even if they don’t move very far. But regardless of what your throwing hand is, you have to work to make sure that you clear that lane.

As soon as the runner breaks for second, you have to start moving directly at the pitcher. Even if the pitcher ends up delivering the pitch, you will be able to adjust quickly, and won’t be too far out of position. About 2 steps directly towards the mound is all it takes to clear a throwing lane. As you move towards the mound, you have to be in an athletic position. This is because you are charging towards a pitcher who is making a throw to you – his throw will get on you quickly! NEVER trust a pitcher to make a good throw. Once you’ve got the ball, you should be about 5-10 feet towards the mound, away from first. That’s plenty of room for you to make the throw to second.

Remember, the only way you will be ready to react to this situation is if it is a part of your pre-pitch preparation. You have to be prepared for the runner to break on first move whenever there is a lefty on the mound. And you always have to clear a lane. Staying too close to first and not making the effort to clear the lane is lazy baseball. Always be prepared. Understand the situation and make this an instinctive reaction. Think the game.