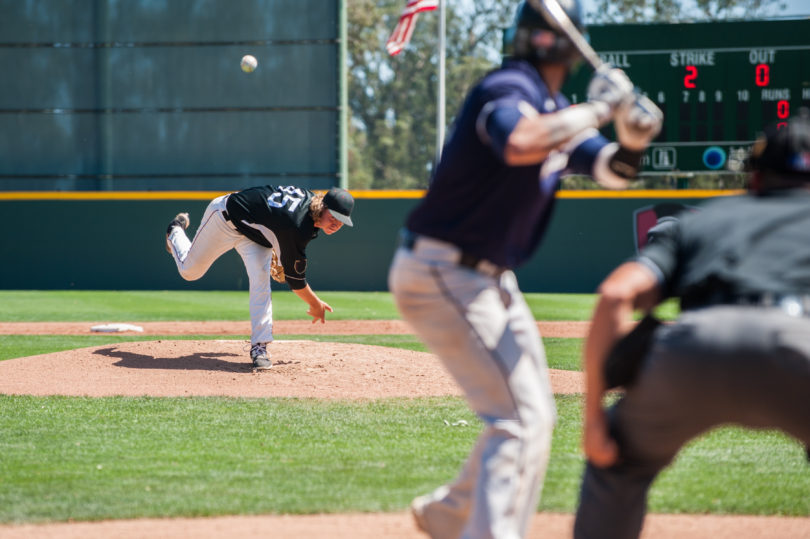 The bases are loaded in the bottom of the 9th. The defense is clinging to a 6-4 lead, and the right-handed pitcher has fallen behind in the count 2-0. The batter is a right-handed hitting freshman who has performed well early in the season, earning himself a recent move to the cleanup spot in the order, where he has since struggled. He steps into the box, eager to be the hero and prove to his teammates that he belongs in the 4-hole.

The 2-0 pitch is delivered, another ball up and out of the zone. The batter peeks down at his coach who gives him the take sign. The pitcher comes set and delivers to the batter, who watches a meaty fastball go right down the middle for the first strike. Now with a 3-1 hitters’ count, the batter steps out of the box and tells himself that this is the pitch. He is expecting a fastball, and tells himself he is going to knock it into the outfield to tie the game. The pitcher comes set and delivers the 3-1 pitch. It’s a fastball and looks big to the batter. He gets his front foot down and takes a hack to try to end the game on one swing. The pitch is chest high on the inner half, a borderline strike. The batter connects.

It turns out the batter’s eyes were too big for his bat. The ball gets in on his hands and he gets jammed. The ball chops to the third baseman, who fields the easy hop and comes home with it as the batter tries to untangle his feet and get out of the box. It’s a worst case scenario for the offense, and the 5-2-3 double play ends the threat and the game.

The mistake on this play starts in the batter’s head. He wants desperately to come through for his team and prove himself as a young player, but what the offense needs him to do is stay within himself and not try to do too much. We see these over aggressive mistakes play out often, especially when a hitter is pressing. The problem here is plate discipline and approach.

With the bases juiced and a 3-1 count, the hitter is right to look for a pitch that he can drive. Sitting on a fastball is okay as well. The problem is the hitter has pre-determined the outcome to the point where he is in automatic swing mode and no longer considering the big picture. A walk here is a great result for the team. The batter has all the leverage, as the only strike the pitcher has thrown him was a get-me-over 3-0 fastball. In a 3-1 count with the bases loaded, the batter can afford to be extremely picky. He doesn’t have to swing just because it’s a strike. He can focus on one pitch type in one location and make sure if that pitch comes, he does damage.

When the situation gets big, the world’s most clutch hitters stay within themselves and force the pitchers to execute quality pitches. Working on plate discipline should be a priority, as it strongly correlates to offensive success. Combined with a situation based approach to thinking the game, you’ll make the pitcher earn his outs and limit unfortunate situations like this one.