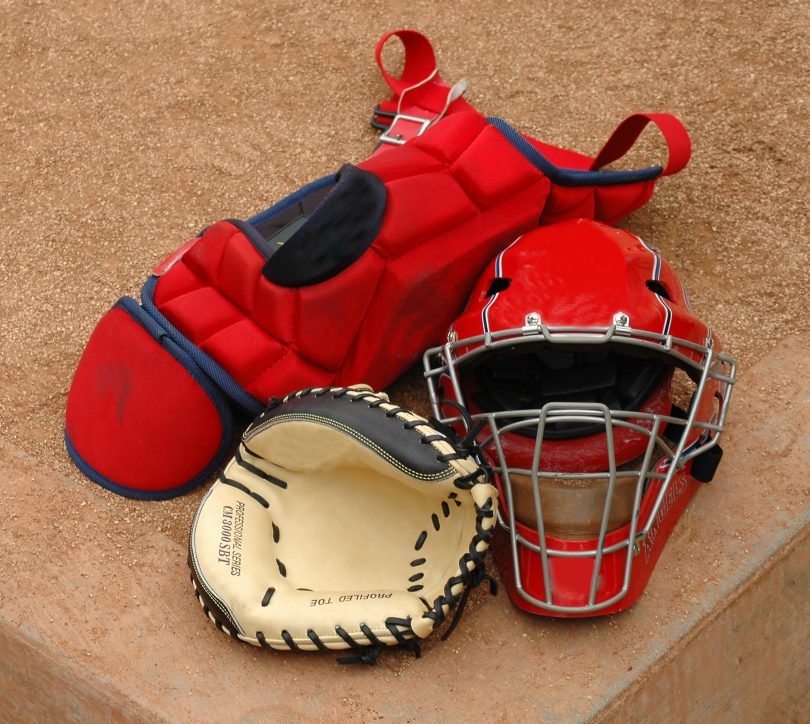 There are two outs in the 3rd  inning of a 1-1 game. There are runners on first and third with a 2-2 count on the left-handed hitter. He is matched-up favorably against a right-handed pitcher, who he already doubled off of in his first at bat.

The 2-2 pitch comes in humming at the top of the strike zone. The batter takes a big hack, but just misses it. He skies a pop-up headed directly behind home plate. The catcher turns to face the crowd and make the play, mask in hand. He locates the ball and tosses his mask off to the right. As the ball comes screaming down back towards the catcher, the wind also pushes it out towards left field slightly. The catcher adjusts course and gets under it. Right as ball is about to hit leather, the catcher unexpectedly steps on his mask, losing balance ever so slightly. The change in position causes the ball to hit off the heel of his glove and ricochet to the ground. Embarrassed, he heads back to the plate with the inning extended.

The batter fouls off three more pitches before working the count full. On the 3-2 pitch, the umpire rings him up on a fastball hugging the outside corner. The threat is squashed 5 pitches later.

The catcher’s mistake of discarding his mask before he figured out where the ball would be could have shown up in the score. The offense received another opportunity to capitalize on a scoring situation. Errors like this always show up in other little ways and often hurt more than one might realize, even if no damage is done in the scoring column. The pitcher had to throw 5 more high stress pitches. Every pitch can have a cumulative impact throughout the game and come back to bite a team later in the game. It could be having to go to the bullpen earlier because of pitch count, it could be that particular batter getting to see 5 additional pitches to put in his memory bank for his next at bat, or it could be fatigue that shows up later before the pitcher comes out of the game.

Make no mistake about it, baseball is a game of details. Catchers need to make sure when they discard their mask or helmet that it will not interfere with their play on the ball. You simply can’t afford to give teams extra chances or cost your pitcher extra pitches. There is no way to measure exactly how that play influenced the rest of the game, but you can bet it had an impact. You can also bet that the embarrassed catcher will think the game next time and make sure his mask is out of the way. Luckily, you don’t have to make that mistake yourself, you can learn from his!