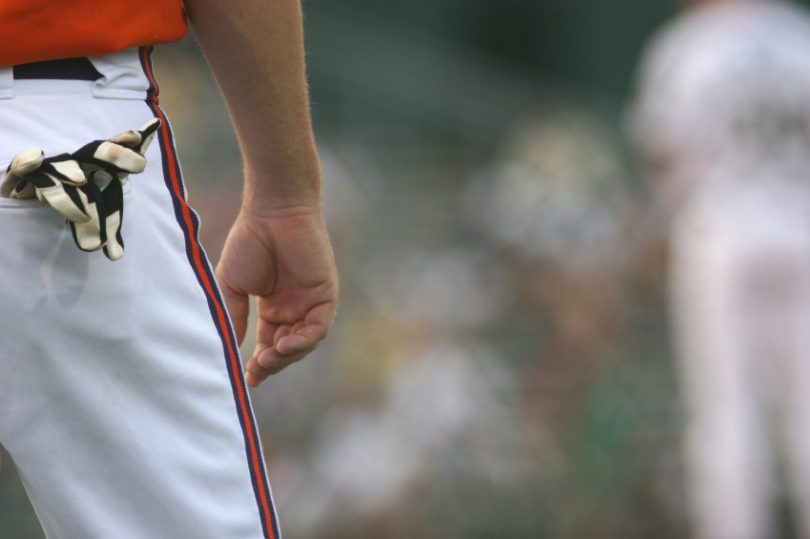 When Coach John gets to the field, he locates Alex and watches him warm-up. Alex’s jersey is untucked and he’s being lazy and a little sloppy with his warm up. He’s laughing and missing the occasional throw because he’s distracted. Even though Alex feels like he is preparing like he normally does, his sloppy appearance and lack of focus makes it seem like he isn’t taking the game seriously. At one point during the warm-up, Alex’s hat, which was slightly askew, falls off his head and to the ground while he is playing catch. He kicks it away and laughs.

When the game starts, Alex plays well. But, so does one of the other infielders (Rick) that Coach John saw. With players being committed to schools left and right, Coach John thinks that he’s under pressure to decide which player should get the scholarship offer. Alex and Rick both show above average defensive ability and signs that they will be able to hit at the next level. They both have 60-yd dash times of around 6.8. With all else equal on the baseball field, Coach John starts to think about other things. He remembers how Alex looked lazy and unfocused during warm-ups and that he didn’t seem to care about his uniform. Rick came to the field looking like he was proud of his uniform and was focused and calm during warm-ups. John starts to wonder. Does Alex really care? Will he prepare for games seriously enough so that he will be ready to play his best? Coach John needs to make a decision. He decides to offer the scholarship to Rick based on “preparation” concerns he has about Alex.

• Your appearance matters. A clean, complete uniform will never hurt your chances of getting recruited, but a messy or sloppy appearance can. Looking sloppy gives coaches the perception that you might not take things seriously or you don’t care. Yes, this is unfair, but when recruiters are faced with difficult high pressure decisions, anything that sets a player apart matters.

• Show that you are prepared and focused before, during and after the game. You don’t have to be intense during warm ups. But, if you are distracted and lazy before your games, recruiters will question if you are serious enough to play for their teams or if you will care enough about things that matter more, like working hard to improve and good grades.

• Because recruiters don’t have time to get to know you, they have to make decisions based on what they see. Make sure your shirt is tucked in all the way, your uniform fits, your hat is worn straight, and your actions tell coaches that you are focused fully on your preparation and the game. When it comes to your appearance, think Derek Jeter and not Manny Ramirez.

Just click on the links below and learn from Alex’s mistakes!