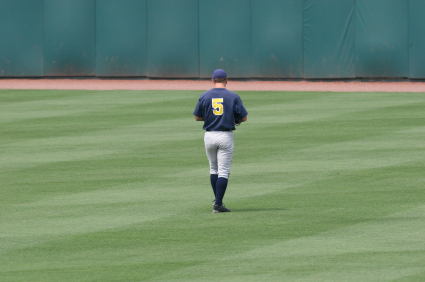 Right fielders in college are a mixed bag. The prototypical right fielder has a power arm and a power swing. If a right fielder has offensive skills,  range and defense can be sacrificed. However, like a lot of the other positions that used to be based on big boppers, this position is  changing in the new bat era.

The new right fielder is more athletic than in the past. That is the biggest difference. There isn’t a spot in the field anymore for a guy who can’t handle himself on defense. Don’t believe us? Take it from Kevin O’Sullivan, head coach of the 2017 National Champion Florida Gators, who said, “If you can’t play defense, you can’t play at our level.” That being said, right fielders still don’t have to be covering ground the same way a center fielder does. Getting good jumps is going to be key. If you can take away some of the gap by getting a good jump on the ball, you’re going to save your team a lot of runs. The one thing that hasn’t changed about right field is the need for a good arm. It’s long been tradition that the corner outfielder with the strongest arm plays in right field because of the need for a long throw to third. Keeping a runner from going 1st to 3rd on a single to right field is a huge asset for a defense. It is very rare that there is a right fielder in college with a subpar arm. If you think that you fit best in right field, start concentrating on your throwing program. Learn proper mechanics so that your throws don’t tail or cut. Learn how to get rid of the ball quickly and how to judge a field so that you can throw a long-hop every time.  Defensive strength and accuracy  mean playing time for  right fielders, and mastering  these skills  can turn an average defender into a great one.

Offensively, like first base, right fielders are no longer relied on to hit the ball out of the ballpark consistently.  A lot of teams do like to put a good bat out in right field, but often it’s a guy with raw athleticism as opposed to  old-fashioned power. That means that a right fielder’s job at the plate is going to be dictated by his skill set. Obviously, teams will hope that they can find a guy to play right and hit in the middle of the order. However, if that isn’t the case for you, don’t worry. If you have speed, find a way to use it. If you’re a contact guy, learn how to pick up your hits in big situations. The key to offense in today’s era of college baseball is quality at-bats. You’ll hear that preached at just about every program in the nation. Learn how to have team-first at bats and be a productive offensive player and your coach will find a spot for you.

Overall, right field is a changing position. It’s wide open right now to all types of players while coaches explore the type of team that they’re putting on the field.  Who plays right will depend on the skill set of the team as a whole.  Remember, in the age of the new bats, it’s harder for one player to win a game on his own. Tailor everything you do so that your strengths are instrumental for your team’s ability to win.

Want to listen to the audio version of this article? Just click play below! What does it take to...