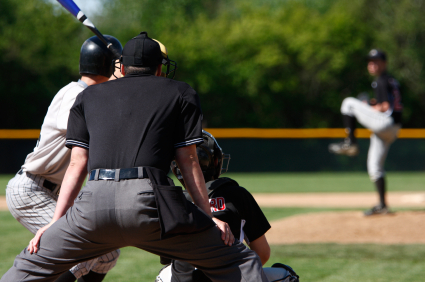 The Play: The pitcher delivers the 3-1 pitch over the plate, but well above the top of the strike zone. The hitter recognizes the fastball, takes a big hack, and fouls the ball off. He steps out and reloads for the full count. The runners are off on the pitch, which is a ball off the outside edge of the plate. The hitter takes the pitch and turns to flip his bat towards the dugout. As he lets go of the bat, the umpire calls strike three and the inning is over.  The hitter turns in protest, arguing that the ball was well off the plate. He continues jabbering at the umpire as he takes his position at 1st base.

During the at bat, the hitter had a 3-1 count. He assumed that the pitcher was going to throw a fastball since he needed to throw a strike. Instead of looking for a particular pitch (a fastball) in one particular spot, the hitter assumed that pitch would be a strike and swung at the pitch out of the hand. The 3-1 pitch would have been ball 4, but the hitter chased it and forced the 3-2 count. Swinging at the 3-1 pitch was the batters’ decision and totally under his control. The at bat would have been a success and the game tied if he had done what he should have and taken the walk.  Instead, the hitter transferred the blame of his failure on the umpire, thinking “I just got hosed. What was I supposed to do?” Truth be told, there is almost always something you can do differently to create a different result. The best players take ownership over their errors and accept responsibility for their actions, looking for ways to improve for the future. Next time you find yourself making an excuse or transferring the blame, check yourself and think about what YOU could do differently to improve for the next time you find yourself in a similar situation. Accepting responsibility and taking ownership of decisions (good and bad) are big steps toward improving as a player.

There is a common fear among recruits (and parents) that college coaches will somehow miss them in...

This season, some of you will be confronted with a situation you’ve never experienced before:...