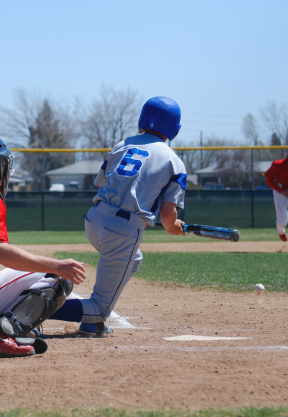 The Situation: Runners on 1st and 2nd , no outs, tie ballgame in the top of the 7th inning of a Super Regional playoff game. The best hitter on the team, Jason, is up to bat. But Jason has been in a terrible slump—the worst of his career. He is 1 for his last 20, and 0 for 3 tonight with 2 strikeouts. He hasn’t bunted all year, but knows what sign is coming. All he can think about is all the times he blew off bunting work in practice, thinking that he was too good a hitter to ever need to bunt.

The Play: Jason picks up his coach in the 3rd base box, and gets the bunt sign. He is not confident in his ability to get the job done. The first pitch comes and Jason stabs at it, missing the curve ball entirely. He peaks down to third, hoping for a hit-and-run at least, but the time isn’t right. Jason has been striking out and his coach doesn’t trust that he will get the ball to the ground. Jason gets the bunt sign. The 0-1 pitch comes in and the Jason squares to bunt. It’s a fastball this time and he fouls it straight back, leaving himself in an 0-2 hole.  Sensing the lack of confidence in the bunt, the coach lets his slugger swing away with two strikes.

This time, the pitcher throws a hard slider out of the zone. Jason picks the spin up late and swings at it like a fastball, catching the ball at the end of the bat, out in front. The bouncing ball is directed right at the shortstop, who starts the easy 6-4-3 double play.

The Outcome: The next hitter hits a deep fly ball that’s caught on the warning track and the game stays tied.  With 2 outs in the bottom of the ninth, a wild pitch with a runner on 3rd scores the winning run for the opposing team.

What Went Wrong: It sounds cliché, but the success or failure of plays during a game are often determined by the work you put in on entirely different days or even months. Super Regionals take place in June, but the outcome of this play was determined by a failure to practice the right way from February to May.

No player is too good to get better at any skill. A pitcher who strikes out a ton of hitters is never too good to work on holding runners. A hitter who normally rakes is never too good to work on his short game. If you are an All-American hitter, chances are that when you are given the bunt sign, it will be in a HUGE situation in the game/season. This is a classic case of how games and seasons are made and lost before they take place. Don’t put yourself in a situation that will compromise your in-game performance.  No one is ever too good for a drill or exercise at practice. Do your best at every aspect of the game, you never know when your number will be called to do something unexpected. When it is, be ready!