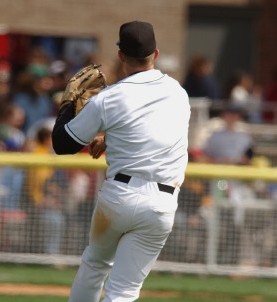 The Situation: Man on first, one out, tie game in the 6th. The runner on first has average speed, and is being held on by the first baseman. A left-handed hitter is at the plate.

The Play: The hitter rips a sharp two hopper towards the first baseman. The first baseman reaches for it, and the ball bounces off his glove, ricocheting towards second. The first baseman tears after it and picks it up with his bare hand. His back is to first base, and is angled slightly away from second, towards left-center. He can see that the runner isn’t quite to second yet, so grabs the ball and heaves it at the shortstop.

The Outcome: The ball flies into the dirt and skitters past the shortstop into shallow left field. The runner gets up and heads to third base. The next hitter hits a fly ball to deep left for a sacrifice fly, giving his team the lead.

Everyone will make physical errors. It’s a part of baseball. The key to physical errors is minimizing the effect. Once you’ve made an error, you have to keep calm. It can be incredibly hard, but allowing the game to speed up on you will only cause you to make things worse. In this situation, the first baseman knew that he had messed up the double play, so he tried to compensate by hurrying his throw. While that was a good idea, he rushed the play. Any good ballplayer knows your chances are low of getting a runner out once the ball has bounced away from you. But in this situation, the first baseman wanted to make up for his error, and forgot about slowing down the game. If he had taken a split second to set his feet, he may not have gotten the runner at second, but at least his throw would have been accurate. The bottom line is, don’t panic. When something goes wrong, the tendency is to let the game get away. Control yourself. Make sure that you limit the damage. A coach will be upset by a physical error, but he’ll understand. A coach will be furious if you compound a physical error with a mental one. Once the play is over, make sure that you get your mind back to the present. Use a deep breath to keep yourself in the moment. You can’t think in terms of “don’t.” In pre-pitch, don’t say to yourself “don’t mess this one up.” When you do that, the last thought on your mind before the ball is hit is about making an error. Think in positive terms. If you’ve just made an error, take a deep breath, wipe it away, and think about getting the next one. Always keep control of the pace of the game in your mind. Slow the game down. Think the game.