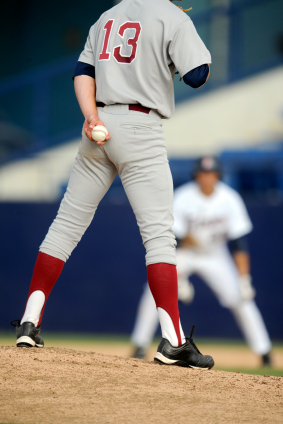 The Situation: It is early in a tie ballgame and the pitcher has just given up a one-out double to the 7th hitter on an 0-2 mistake with the bases empty. The pitcher is frustrated by his carelessness and eager to make up for his mistake with the next batter. He delivers the first pitch to the 8th hitter (a called strike) and peers in for the next sign.

The Play: Knowing that the opposing coach is aggressive, trying to get the early lead, and has his two weakest hitters coming up, the pitching coach signs in an inside-move pick-off play to second with an 0-1 count. The pitcher, annoyed that he will have to break his pitching rhythm with “a pickoff attempt that never gets anyone out,” gives a lazy inside move, lacking in any effort to hide the attempt to pickoff. He lifts his leg, toe pointed at 2nd from the get-go, and spins towards second in one movement, a move that looks nothing like his normal delivery.

The Outcome: Seeing from the leg lift that the pick-off attempt looks nothing like the pitchers’ normal delivery, the runner at second gets back to the bag, not even drawing a throw. The pitching coach is fuming in the dugout at the pick-off attempt that lacked in effort and showed a clear lack of understanding for the situation. The runner knows he has 3rd stolen on the next pitch. He gets his momentum going and rolls into the delivery, stealing third on the next pitch standing up. Despite the pitch being a strike, the runner makes it to third with less than 2 outs. The batter works the count to 2-2 with a drawn in infield, and then puts the ball in play up the middle past the pitcher.

Despite playing in, the second baseman knows his only play is at first and he takes the out as the 7-hitter scores from 3rd base. With two outs, the 9-hitter pops-up to short, ending the inning.

Three things went wrong here. First, the pitcher let the frustration from the outcome with the previous hitter impact his actions moving forward. As a college player, you can never afford to do this.

Second, the pitcher didn’t buy into what his coach and team wanted him to do. This negated the advantage created by a quality scouting report. The pitching coach, having read the scouting report, knew the other team liked to try to steal third in this situation. He also knew that showing a good inside-move to second would squash the running threat, even if they didn’t pick the runner off. If the play had been executed well, no run would have scored and the game would still be tied.

Finally, the pitcher demonstrated a lack of understanding for the situation and failed to deliver a play that requires practice (not necessarily skill) to be good at. Pitchers owe it to their teammates to put the time in, making controllable things like pickoffs more competitive. In college, the little things players do, or don’t do, can be game-changing. A failure to execute these “little” things can cost a team runs and ultimately wins, as the example shows. The lessons here are to be prepared, buy into a team approach, and work hard to control the things you can master with quality practice. That’s thinking the game.