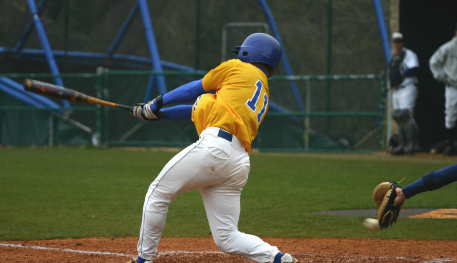 It’s the bottom of the 4th inning of a 4-3 game that the EHS Tigers are winning. The Tigers just had a long top half of the 4th in the field where they made several errors and gave up 2 hits, leading to 3 runs and 27 pitches for their starter. Eric, the EHS left fielder, is leading off the bottom of the 4th. He has been struggling at the plate and already has 2 strikeouts in the game. As he gets ready to hit, he decides he is going to be aggressive and hit the first pitch fastball that he knows is coming. He has seen a graphic floating around twitter about how well the AL All-Stars have hit on first pitch, and decides that it should work for him as well. After all, he doesn’t want to chance getting into a two strike count again. He finishes putting his batting gloves on and prepares for his AB with a few warm-up swings.

Eric gets into the box and gears himself up for a first pitch fastball. The pitcher delivers a fastball and Eric loads, strides, and takes a hack. He chases the fastball, which was up and out of the strike zone, and pops it up sky-high in foul territory on the first base line. The first baseman ranges a few steps to his left and catches the ball without incident in foul territory. Eric, knowing he swung at a ball he assumed would be a strike takes the long hard walk back to the dugout. His coach in the 3rd base box is visibly upset at his decision.

After a long, taxing inning on pitching and defense that let the opposing team back into the game, Eric has put his team in a bad position, having seen one pitch and made one out. His teammates will now have to bear the burden of giving their starter time to regroup and catch his breath, as well as try to slow the momentum of the comeback.

First, Eric let his recent struggles dictate his approach rather than thinking about the current situation and the ways he could have a quality at bat for his team. When players are struggling offensively, they often make the mistake of thinking that hits are the only way to be successful. This is far from the truth. In this situation, the Tigers need their hitters to do a few things to respond to the events of the last half inning. First, they need to ensure their pitcher gets time in the dugout to regroup after throwing so many pitches and enduring a long half inning on the mound. It can be very hard on pitchers to come back out to the mound following a stressful inning if their time in the dugout is very short. In this situation, success for Eric could have been defined by just seeing a lot of pitches. Second, they need to find a way to get the momentum back, or at least slow the momentum of the oppositions’s comeback. This situation likely calls for the leadoff hitter to take a pitch and maybe even take pitches until he has a strike. Remember, the opposing pitcher has been sitting on the bench for a long time and the offense should make him earn his way through the inning. Eric’s aggressive decision increased the potential for a quick inning now that the pitcher needed only one pitch to get the first out. If the pitcher comes back with a 1st pitch strike to the second batter, the second batter will likely have to take another pitch, potentially putting him in a huge hole. The opposing pitcher now has all the control.

In addition to his plan hurting the team’s chances for success, Eric made a big mistake with his predetermined decision to swing at any fastball. Early in the count and ahead in the count, hitters should be looking for a specific pitch in a specific zone. This particular situation calls for even more selectivity. It is okay to be aggressive early in the count, but this strategy can’t be done blindly. The AL All-Stars don’t have high batting averages on the first pitch because they are up there just swinging at anything. They are using the count to focus on getting the pitch and/or location they can hit well, recognizing when it comes, and taking advantage of it. The game situation and team needs should also trump any individual plan. It is another case when a player was focused on a personal outcome, rather than the process that is most likely to lead to the best outcome for the team. After all, it is a team game and the object is to win!