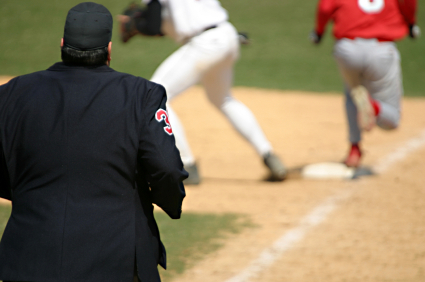 The Outcome: The second baseman picks up the grounder, reaches out, and tags the runner from 1st. He then throws the ball to 1st, completing the double play, and ending the inning without the run scoring.

A soft ground ball towards the second baseman puts a runner on first in a tough situation. On one hand, the runner wants to pressure the defense by going hard to second. But on the other, he cannot get tagged out by the second baseman when the game is on the line.

The best way to read the play, is to watch the second baseman’s feet. If you see him start to slow down and set his feet to field the ground ball within an arm’s reach of the base path, STOP. At that point, you will have to pull up short, and do everything you can to avoid the second baseman’s tag.

The goal of stopping between first and second is to stay out of the easy double play. The worst thing a runner can do is run directly into the tag, giving the defense an easy 2 outs. The runner has to read the speed of the grounder and the second baseman’s break to the ball, then quickly decide what to do. This is not hard! Understand the situation before it happens, and be ready to react. Think the game!