The pitcher knows he needs to pitch around the batter so he teases with 2 curveballs off the outside. The catcher calls an inside fastball that’s supposed to be off the plate. The pitcher misses down the middle.

The hitter singles into the right-center field gap and the run scores.

When you get to college, pitching coaches will often preach the need to throw strikes. You’ll get sick of hearing it. You’ll hate it. But you have to do it. A guy with stuff can be a good pitcher. But a guy with command can be a shutdown, filthy, Friday night starter.

But command isn’t just throwing strikes, it’s also knowing when not to. In this situation, the pitcher did not commit to his plan. He has already thrown two balls to the hitter, so he definitely knows that he needs to be pitching around the lefty to set up the double play to get to the righty. But he got a little lazy, and the hitter made him pay.

All it takes in college is one pitch to change the course of a game. Watch a great pitcher like Max Scherzer. He’s relentless. Every pitch executes a plan. Every batter is off balance. Now, obviously nobody is expecting high school or college levels athletes to have that level of skill, but that level of focus should be your goal. Remember, your plan for each pitch is just as important as the pitch itself. Expecting to throw your best pitch every time isn’t achievable. But preparing for each pitch to the best of your ability is completely within your control. Any pitcher willing to plan, commit, and compete on the mound will give themselves a chance to dominate a ballgame. 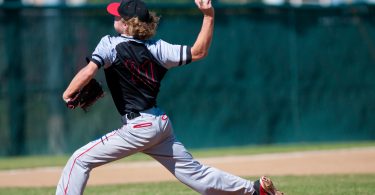