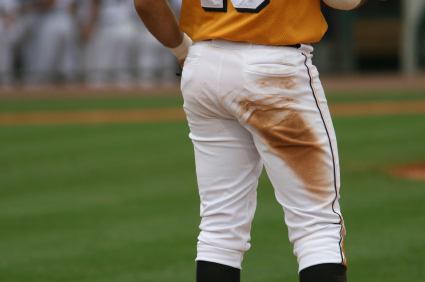 The Situation: Runner on 1st, nobody out, 7th inning, tie game. The 3-hitter is up and hasn’t showed bunt on the first two pitches, so the defense is expecting him to still swing away in a 2-0 count.

The Play: The shortstop knows that a double-play ball would be huge for his team. The hitter swings away and stings a 2-hopper to the shortstop’s backhand. The shortstop ranges over and reaches out, but the ball glances off the heel of his glove and skips into left field. The runners are now and first and second with nobody out and the 4-hitter coming up. The shortstop can’t believe that he didn’t make that play. He wants to dig a hole in the infield and climb in. He knows that this whole inning is on his head.

The 4-hitter steps to the plate and the shortstop angrily kicks at the dirt as he gets back in position. The 4-hitter swings at the first pitch and hits a hard grounder towards the middle. The shortstop races towards it and decides to make up for booting the last double-play ball.

The Outcome: The shortstop reaches out and tries to do a quick glove-flip to the second-baseman. The ball hits the fingertips of his glove and spins off. Everyone is safe and the bases are loaded.

What Went Wrong: In every level of baseball, physical errors happen. They are a part of the game. While coaches are never happy about physical errors, they accept them as inevitable. Mental errors, on the other hand, are unacceptable. In this situation, the shortstop made a mental error that led to a physical one. Everyone knows that baseball is a game made up of failure. The hard part is being able to set aside failure in the middle of a game and keep playing. Whether it be offense or defense, you always have to be able to compartmentalize what happens on the field.

If you fail, and everyone will fail at some point, find a way to get yourself back under control. Take a deep breath, understand what happened, and then put it away. You can dwell on it after the game.

When the shortstop made the error in this situation, he beat himself up about it. He knew how big the situation was and he was disappointed that he couldn’t come through for the team. But never forget, THE BIGGER THE SITUATION, THE MORE SELF-CONTROL YOU NEED.  Never let yourself get carried away by failure, and never carry failure to the next play or even the next pitch.

Start by understanding yourself. Find what works for you. Some different methods for keeping yourself under control at any point in the game include:

Be prepared for every pitch. Understand what you have to do to stay under control and keep thinking clearly no matter what happens on the field. Find a way. Think the game.