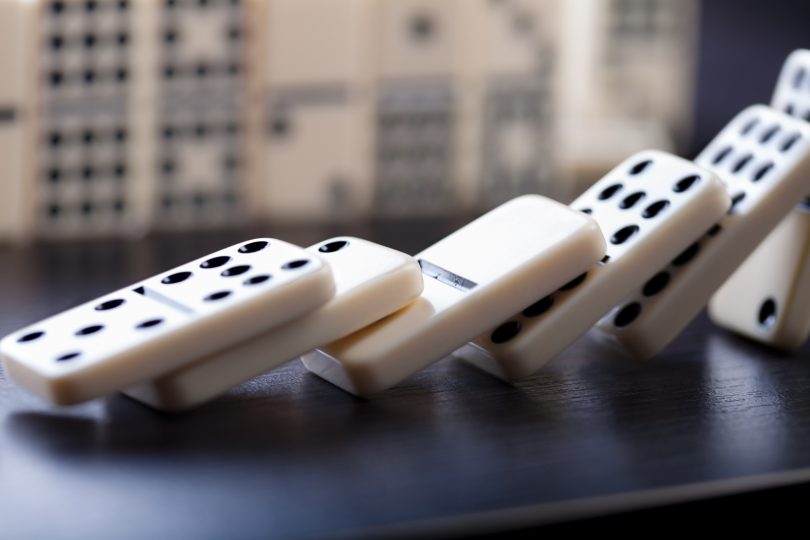 There are runners on 1st and 2nd with 2 outs in the top of the 5th. It’s a 5-4 game in favor of the visitors, who have just taken the lead. There is an 0-2 count on the right-handed batter, who digs into the box against a right-handed power pitcher.

The pitcher comes set and delivers a filthy breaking ball. The pitch comes in at the knees and darts into the dirt as the batter swings over the top of it for strike 3. The catcher drops to his knees to block the ball, but his glove doesn’t cover his 5-hole and the ball squirts right through his legs to the backstop. As the catcher is in his blocking position, the backswing from the batter makes contact with the catcher’s mask, causing him to pause slightly before giving chase to the ball.

The catcher sprints after the ball, as the batter takes off for first and the runners start circling the bases. With the pitcher watching the play develop from the infield grass, the catcher bare-hands the ball and fires a side armed throw towards first. The rushed throw badly misses the mark, not only getting passed the first baseman, but also the second baseman who was backing up.

When the dust settles and the ball has been retrieved by the right fielder, the batter who struck out is at 2nd, the runner who started at 1st is at 3rd and the runner who started at 2nd has come around to score. The catcher complains to the umpire that the backswing interfered with him, a rule that would make it a dead ball, the batter out, and the inning over. After conferring with the other umpires, none of them saw the interference and the play stands as it played out.

On this play, a better questions might be what went right!? But for the sake of improvement and learning from the mistakes of others, let’s try to sort through the errors.

The missed call. Let’s start with the missed interference call. The umpiring crew misses this call, plain and simple. However, the catcher’s initial reactions is correct. He locates the ball and sprints after it, trying to finish the play before making his case.

The pitcher’s mistake. Great pitch, unfortunate result. But what could the pitcher have done differently? Instead of standing and watching the rest of the play unfold, he needs to get to home plate. If he gets to home plate and watches the play, he can help the catcher realize there is no play at first. It’s also likely the runner from second could have scored on the passed ball, even if the catcher had held onto the ball, because no one was covering home. This is a mental mistake on the pitchers part, and helps contribute to the runner coming around to score.

The second baseman’s mistake. Very difficult play for the second baseman to anticipate, but he makes a minor mistake that proves costly as well. When he backs up, he does a poor job of lining up the angle of the thrower to 1st base. This results in him getting pulled too close to the foul line and unable to backup the throw that is to the second base side of him. This is hard to envision from reading, so check out the play for yourself right here. Just skip ahead to the 50 second mark and watch the wild play unfold.

Can you see all the mistakes unfolding in this disaster of a play after watching the video? To make matters worse, this was a win-or-go-home playoff game. When things go this poorly, it’s rarely one person’s fault. As you can see, there were several players in this situation who forgot to think the game, and it cost them.