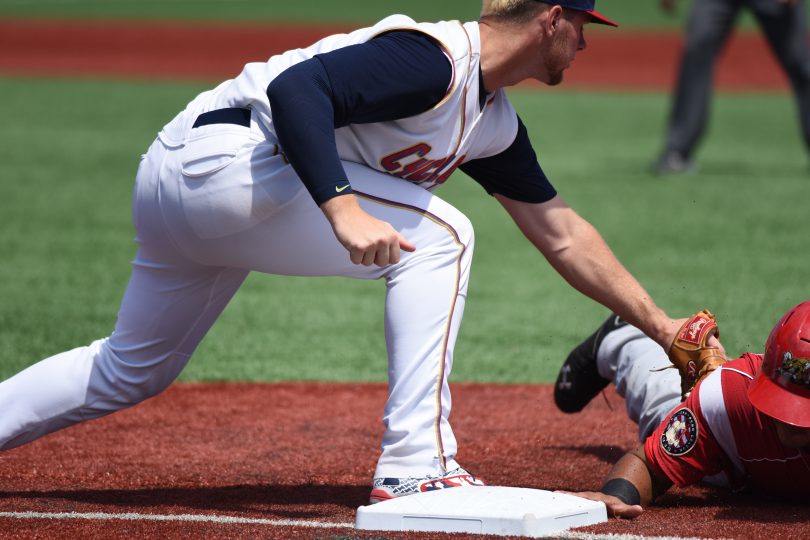 There are runners 1st and 2nd with 1 out in the top of the 7th inning of a 6-4 game. The offense is ahead and looking to expand on their lead.

The batter takes the pitch and hits a sharp single up the middle. The base runners take off. The runner from second gets a great jump and is likely to score easily. The runner from first base is thinking about 2 bases right away and turns towards third. The center fielder charges the ball hard and fields it aligned to home. As he gathers to make the throw home, he realizes that there will be no play. He takes one extra shuffle to set his feet to third and makes a throw to the outside of third base. The throw is slightly off-line but takes a long hop to the waiting third baseman, beating the runner. The third baseman lunges back to the bag to make the tag.

The runner dives head first into third, looking like a dead out. Rather than give in, he swims his right arm back trying to avoid the tag. Rather than get tagged on the arm, he is tagged up high on the shoulder. It’s an athletic move and despite being tagged just before touching the base safely, his slide convinces the umpire that the tag didn’t get there on time and he is called safe. With no replay, the call stands and there are runners on 1st and 3rd with 1 out. The runner who is now on third comes home to score on a single before the next two batters are retired.

The umpire made a poor call at third, but that wasn’t the only thing that allowed the base runner to get away with an overly aggressive mistake. However slight, the extra shuffle due to the center fielder’s initial decision to prepare for a throw home proves costly. Having to readjust his feet for a throw to third costs valuable time, turning what would be an easy out into a close play. The runner comes around to score because of the mistake.

This play epitomizes the value of thinking the game. A seemingly small mistake ends up costing a run and having a big impact on a game. These small wins and loses often have big consequences. In this situation, there was a lot for the defense to think about. Given the size of the field (big), the length of the grass (average), the pace of the ball (average), and the speed/jump of the runner (above average), the outfielder must know before he even picks the ball up that the only play here is to go to third and take the out. As such, he needs to align to throw to third right away.

Even though the runner gets away with it, he also makes a mistake on this play with the overly aggressive attempt to get to third base. On the flipside of that initial poor decision is his slide, which is a positive think the game moment. We’ve discussed the importance of being able to read throws and make good slides here. Controlling your body while sliding and being able to swim your hand out of the way of a tag is an advanced skill that can and should be cultivated through practice. Being able to slide well impacts outcomes far more than you would think, and this play is a great example of that. If you watch closely, you’ll notice that there are positive and negative think the game moments on every single play. Keep reading these articles so you can be on the right side of decision-making.