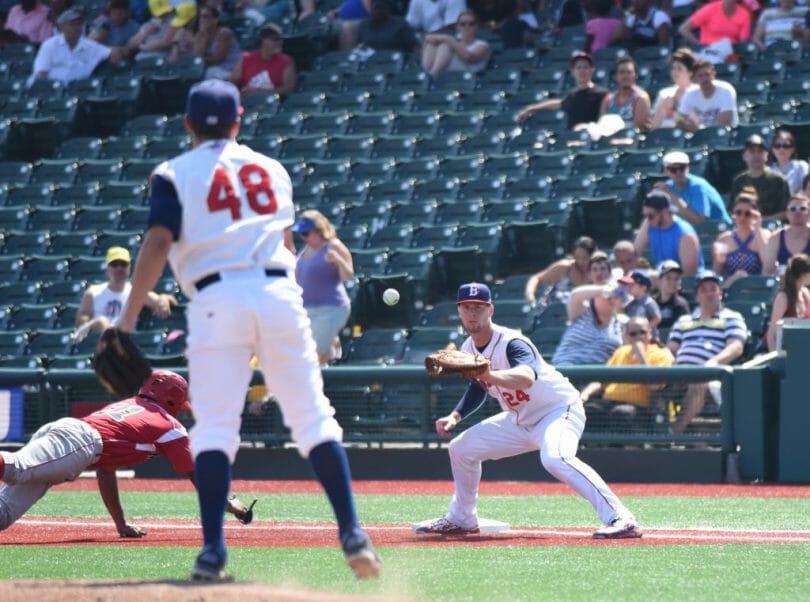 Runner on first, two outs, bottom of the 8th. The game is tied, and the runner on first has good speed. The 3-hitter is up. It’s not necessarily a steal situation because they don’t want to take the bat out of the 3-hitter’s hands, but the offense still wants to try and get their runner into scoring position. The hitter works the count to 1-1. The runner has taken his 3-step lead before each pitch, and he’s held his lead until his secondary.

As the pitcher toes the rubber, the runner on first takes his normal lead. The pitcher starts to come set, and the runner creeps with his feet, just a few inches, widening his lead. He sinks down into his legs just a little bit. The pitcher notices the change. He does a long-hold, and then fires to first using his A-move.

The runner is caught leaning the wrong way. The first baseman applies the tag, and the runner is picked off first, ending the inning.

The runner’s mental mistake in this situation was changing his approach when taking his lead. This is something that isn’t addressed much in high school. Most high school first basemen and pitchers aren’t advanced enough to notice and react to a runner changing his lead. In college, it’s a different story. First basemen will be watching every move a runner makes, looking for something to change. Something as simple as an extra half-step or a slightly deeper squat in the runner’s set up is a clue that the runner is thinking about going.

Likewise, pitchers will watch for changes and adjust their holds to throw off the runner. They’ll show C-moves early to try to get the runner to relax, so that they can use their A-move when they think they can catch the runner leaning.

As a runner in a potential steal situation, you have to treat every single pitch like you might stealing. Get your ideal lead, get into your legs, and never go through the motions. Not only will it help you get a better secondary and be more prepared to read the ball in dirt, but it will take away any chance the defense has to pick up a change in your set-up and detect a steal.

Always be prepared. Work hard on every single pitch. Think the game.