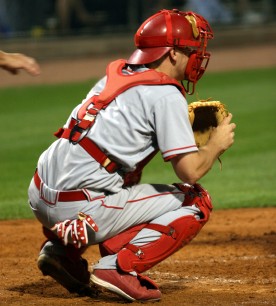 The Situation: Runner on 2nd, 2 outs, the 5-hitter is at the plate. The game is tied in the top of the 7th. The scouting report on the hitter says that he tries to hook the ball and is vulnerable to soft stuff on the outer half. The 6-hitter, on deck, has had terrible at-bats all day, and has looked really uncomfortable at the plate.

The Outcome: The hitter, in an advantage count, is sitting on the fastball. He crushes the ball into the left-centerfield gap for a double, scoring the runner from second, and giving his team the lead.

Obviously the pitcher was overly-aggressive in this situation. He had no need to challenge the hitter with an open base, and should have known that the hitter liked fastballs, and would sit on one in a 2-0 count.