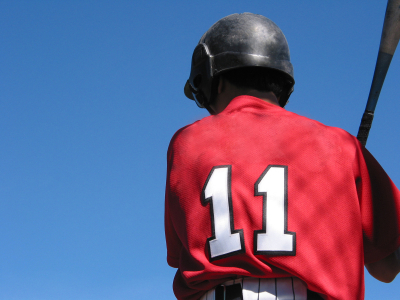 The Situation: Man on first, nobody out. The 8-hitter is at the plate. The game is tied in the 7th inning. The hitter works a 2-1 count, and steps out of the box to pick up his third base coach. The coach puts on the hit-and-run.

The Play: The hitter knows he has to put the ball in play on the ground. He knows that his job is to protect that runner. The pitcher sets, and as he starts his motion the hitter can see the runner break from first base. The pitch starts down the middle, and the hitter sees slider spin on the ball. He swings down on the ball, trying to hammer it into the ground. Because it isn’t a fastball, he’s a little out front. The hitter pops the ball straight up in the air.

The Outcome: The second baseman settles under it as the runner turns and scrambles back towards first base. The runner was looking in the whole way though, and got a good jump back to the bag, so he is able to just beat the throw to stay out of the double play. The hitter heads back to the dugout with a wasted at-bat.

The hitter had the right ideas about what he needed to do on the hit-and-run, but his execution was completely wrong.

Executing a hit-and-run is a skill. In practice, hitters often just go through the reps and pound a couple of fastballs into the ground for their hit-and-run swings. That’s worthless. Hit-and-runs are pressure-packed situations. In a real game, your mind is going to be racing, the pitch will never be straight and down the middle, and you’ll be tense because you know the consequences of messing up. So the first step is: Practice like you play. Set yourself before every hit-and-run in the cage. Put pressure on that swing. Think about what you’re doing, because you’ll absolutely be thinking about it come game time.

The next things the hitter did wrong had to do with the fundamentals of his swing.

It’s amazing how many guys will get to college ball still trying to swing down at the ball on a hit-and-run. When you swing down at the ball you have to make contact at the perfect point in order to hit a grounder. If you’re too early, your bat path down will catch the front side of the ball and cause back spin, shooting the ball straight up. If you’re too late, you’ll probably either swing and miss, or foul the ball back. When you swing at a pitch on a hit-and-run you have to take a FLAT swing, and aim for the TOP HALF of the baseball. That’s all you should be thinking at the plate. Flat swing, top half. You already know you’re swinging no matter what the pitch and location are, so just concentrate on flat swing, top half.

Finally, the hitter lunged at the pitch. There’s no reason to be over your front foot on a hit-and-run swing. The more you jump at the ball, the better the chance you either miss it or hit it straight up, even if you have a flat swing. Take the mindset that you’re going to let yourself get jammed on a hit-and-run. That will help keep you behind the ball. If you have a good flat swing, even if you let the ball get too deep, you’ll still be able to hit a grounder.

As a last note, the runner in this scenario did a fantastic job. As a runner on a hit and run, you look in the entire way. NEVER turn your head towards second. There’s no reason. You are putting 100% of your trust in the hitter, so watch the baseball, because the ball is going to dictate the whole play.

All of these things involve pre-pitch preparation and approach. You have to be able to act on command in this situation. Don’t ever let yourself get caught off-guard or be surprised. Understand the situation, and think the game.